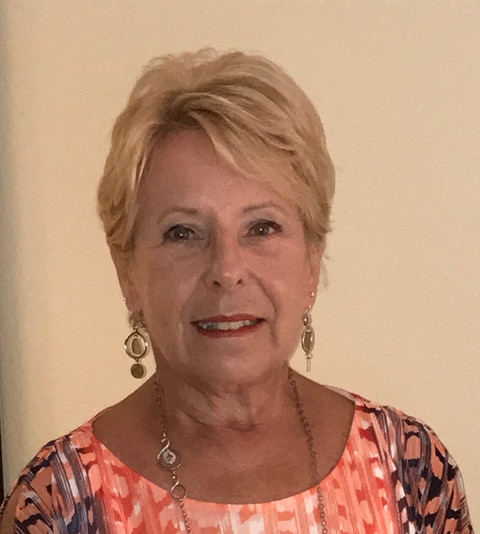 If you spend any time with Cary Flynn you will hear her say “We are SOO lucky to live here!” She has become one of Deercreek’s Ambassadors in the 10 years she’s lived here. You’ll find her with the Friday Night Dining group up at the Club or out on the golf course or hosting a committee meeting or playing Games with a group of Deercreek friends. And she is always looking for ways to make Deercreek better.

Cary and Gregg lived on Long Island, NY for 36 years before moving here on the advice of their long-time friends Paul and Adele Kunzweiler. In 1992 Cary had joined the Smithtown Central School District working in the Department of Special Education, then eventually moving to the Assistant Superintendent’s Office and finally retiring as Administrative Assistant to the Superintendent of Schools. Gregg retired from the school district in 2000 after serving 32 years as a high school teacher and administrator. In 2002, he accepted a position as a professor at Dowling College and a year later became the chair of the Department of Secondary Education. He retired in 2012.

They have two children: Sean, a former Assistant United States Attorney, and currently a General Counsel for a pharmaceutical firm in Boston; and Heather, a surgical nurse at the Mayo Clinic, who is currently working towards her Doctorate in Nursing Practices at UNF. And they have been blessed with six grandchildren.

Cary and Gregg moved to Deercreek the Summer of 2009. Cary had just retired and they were very excited about starting a new chapter in their lives.

She jumped in with enthusiasm as, at the first meeting of the Home and Garden Club that Cary attended in the Fall of 2009, she volunteered to serve on the Programs Committee! This lasted for two years until 2011 when she became Secretary of the Home and Garden Club. In 2013 Cary stepped up to become Vice President and in 2014 took on the office of President, which she held for four years. During her tenure she was a very hands-on, detail-oriented leader and worked continuously to search out ways for the Home and Garden Club to contribute to Deercreek. Cary has worked on the Special Projects Committee, recently procuring two additional deer along the drive; the Holiday Decorations Committee, and the Fashion Show Committee, which delights us every year with a beautiful Spring outing.

Cary is also a member of the Deercreek Women’s Alliance and served on the Membership Committee when first joining the Alliance. She is an avid reader and belongs to the Deercreek Book Club as well as the Deercreek Ladies’ Nine Hole Golfers.

Cary is an active member of Holy Family Parish where she is a Eucharistic Minister and a part of the Prayer Shawl Ministry. This ministry has provided over 400 blessed shawls, either knitted or crocheted, to those with emotional or physical needs in the Jacksonville community, in other parts of the United States, and as far away as South America and Africa.

Cary and Gregg have always said they were very lucky to settle in the Deercreek Golf and Country Club. But we think that the Deercreek community is very lucky to have them here and we’re proud to honor her with the Golden Acorn Award this year to acknowledge her contributions to Deercreek and the Jacksonville community.